Minutes before Ransom Riggs‘ Book Signing event at Fully Booked Bonifacio High Street in Taguig, we got the chance to interviewed him during the separate media conference at U-View room of Fully Booked. Louisse of The Soul Sisters blog invited me to join her in this event since her co-blogger Geraldine couldn’t make it. Thanks so much Louise. I feel blessed and grateful joining the few invited people inside the media conference. There were only four bloggers, few media people and of course the Fully Booked’s representatives.

Seeing Ransom Riggs thrice in a row doesn’t actually lessen my stomach jitters. He is a joy to the eyes, as he always smile and enthusiastic. A lot of questions were thrown to him and he all answered each of those questions enthusiastically. I’ve learned so much about him, his book and his works. As media people throw questions after questions, I can only listen and digest all the information Ransom is sharing to us.

When I asked him, if he ever considered using his own photos for his book, his humble reply is “No”. For him his photos aren’t as good as those photos he used in his book. He thinks his photos are not as old or as expressive. But obviously Ransom has an eye for good photos. After all he is the one in charge in collecting and choosing what photos to use in his books. I think he is just too humble to admit that his photos are also great. And according to him, he is is a big fan of photography in which he draw inspiration, same as with movies, stories, and light.

It surprised me that he actually start collecting photos before writing his book, Miss Peregrine’s Home for Peculiar Children. In fact, it is not even part of his plan to write a novel, but instead he just want to present his collections of photos to his editor as an idea for a picture book. But his editor response with a challenge for him to weaved a story based from the photos he presented. They want him to create a story out of those pictures. And with that challenged in front of him, Ransom started looking for more photos across different locations to complete his now best selling novel.

After the questions and answers at the media conference, attendees also got the chance to take photos with Ransom and got their books signed. Fully Booked gave each attendees a paperback copy of Miss Peregrine’s Home for Peculiar Children to be signed by Ransom. But since I already have my book signed prior to the event, I just asked Ransom to write a dedication for my sister Rica instead. I’m really surprised that he recognized me from Tahereh’s bloggers’ forum as he said to me, “Hey! Nice meeting you twice in a row!”.

After the media conference, we all go upstairs at the atrium of Fully Booked for the book signing where lots of Ransom Riggs fans are patiently waiting. As Ransom scan the crowds that extends up to the third floor of Fully Booked, it is clear how surprise he is. He even take photos and video of the crowd and posted it on his twitter account. “Say hi to the camera!” he calls out. 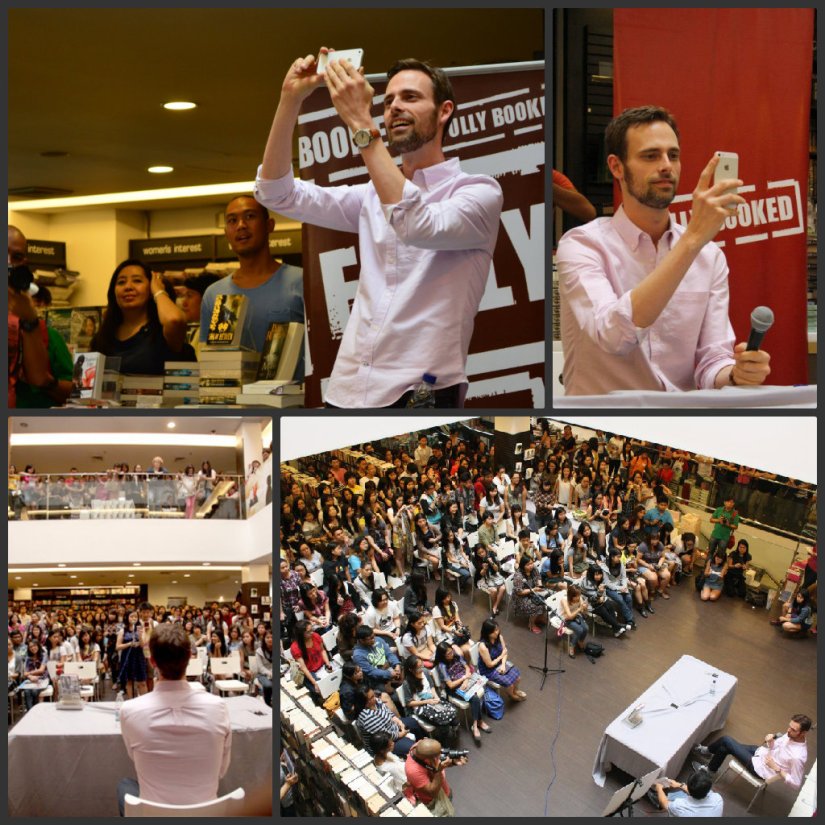 Ransom in front of more than two hundred fans is delightfully funny than he is during the media conference. I think it is because media people are much formal than the fans. Before the actual book signing happens, lots of questions were thrown to Ransom which he all answer honestly and eagerly. No unanswered questions left, even those personal questions such as his marital status. *wink* He also discuss few details about his book and the film adaptation which will be directed by no other than Tim Burton. He also reads few passages from his book, Miss Peregrine’s Home for Peculiar Children.

During the book signing I saw someone sketching Ransom on the spot. I forgot her name, but she isn’t a blogger and looks like a very shy and private person. According to her, she is just actually there killing time. I’m amazed with her random sketches and when I saw her sketching Ransom Riggs, I can’t help but inform my companions about it. Louise also amazed with her talent asked her for some photo of her and her drawing, particularly the Ransom sketch. I think she couldn’t say no to us even if she want to because we are all very pushy. Louise even offered her a free copy of Ransom Riggs’ book, Miss Peregrine’s Home for Peculiar Children, if she will go in front and show Ransom her sketch. Which she did eventually. Glad I still got my number for the book signing, which she used to line up to meet Ransom in front and have her new book signed as well as take some photos with Ransom.

Near the end of the book signing, Tahereh Mafi also drop by to check the event. My friends and I actually expecting her since Tahereh told Louisse a day before that she plan to drop by. And Ransom also confirm this to us in a whisper during the book signing, when our group approach him for another photo ops. He surely remember us from the previous event with Tahereh.

Meeting Ransom and talking to him in person is such an awesome experience. There so much to learn about him and from him. His humility alone strucks me. Add his passion and dedication to his work, you will surely love this guy. I hope he’ll be able to visit Manila again.

Thanks to Fully Booked for bringing Ransom Riggs here in Manila and for organizing the media conference and book signing event. Thanks so much to Louisse for extending her invitation to me. And a million thanks to Ransom for gracing us with his presence and giving us a wonderful bookish experience.