When I found out that these three authors are coming, I already know right away who I’ll be inviting to join me as my plus one. Ate Chai, a friend of mine is a fan of these three lovely authors. She’s the one who pushed me to read the Blue Bloods series of Melisa de la Cruz. She also introduced me some of Alyson Noel and Margareth Stohl books when we used to go out books shopping. It’s like I owe it to her that I know these three authors even before I do book blogging. And now that I finally get the chance to bring one in NBS bloggers forum (thanks to JB for sending me the official NBS invite), it is just right to give that one invite to Ate Chai. And it’s also nice to finally see her again after a long time.

The bloggers forum was held at Best Sellers, Robinson Galleria which is the book store just across the street from my place where I usually buy my books. So happy that I don’t have to travel to get to venue this time. I went early and as expected I’m the first bloggers to be there. JB was there when I enter the venue, who are still busy fixing the sound system and other things for the event. I waited for a while, and do some book shopping since putting me in a place where books are for sale means another day of hoarding. After a while Louisse of Soul Sisters Blog arrived with her mom (Louisse Mom is her plus one). Then more bloggers came together with Ate Chai and finally the three authors, Melissa De La Cruz, Margaret Stohl, and Alyson Noel with the event host, Chad.

Everyone is screaming and get more excited as these three lovely authors entered the second floor of Best Sellers via the glass elevator (first time I saw that lift in use). When Chad introduced them they even offered to pose for us so we can take pictures of them together. They are so lovely and accommodating. Then the program started where we all got the chance to ask them our questions. Everyone is so excited and eagerly listening as these authors answers all our questions honestly and enthusiastically.

I got the chance to ask Melissa one question and I asked her about her collaboration with her husband Mike. This is the exact question:

Frozen is your first credited collaboration project with your husband, Mike. Can you tell us about the collaboration process? Is there any writing difference that Mike is more involved in the project?

Melissa explain their writing process for the first book of Heart of Dread series, Frozen. Melissa mostly write the romantic scenes alone, while Mike do the action scenes. She’s also in charge with the characters, their dialogues and appearance while Mike is more on the world building.

Melissa also discussed her journey as a writer and her experience in fashion and movie industry. She tell us how her blue blood series almost piloted as a TV series and how she turned down a movie and TV series offer before. It’s a huge experience for her and she obviously learned a lot from all those things. Seeing her in front talking all those experiences, you’ll know how much those things means to her. She tell us about her Witches of East End series, which already bought to be a TV series and will air its pilot episode this coming October from Lifetime Network. Melissa is so excited and happy for it. She’s beaming with joy in front while discussing about the story and the actors/actresses of the TV series.

It is really nice to finally meet Melissa in person. I’m always intrigue with her ever since I found out that she is a Filipino who actually born and live here in Manila but migrated to United States. When I was giving her my copy of Serpent’s Kiss together with two blue bloods books, she asked me if I already read Serpent’s Kiss and said to me to be ready for some sexy scenes. At first I thought she’s just telling me about the story which I already have idea, but then when I met her again at the public signing to get another  Witches of East End signed for my friend,  Melisa asked me if I’m still studying which of course I answer honestly, but that ‘s when I realized that she is actually trying to know if I’m old enough to read her Witches of East End series  which is an adult books. She actually think I’m too young to read her books. I love her! 😀

I’m surprise with her stories and at the same time touch by her down to earth persona. Currently Melissa is working on Book Two of Frozen with her husband, and Vampires in Manhattan, a spinoff of “Blue Bloods” series. 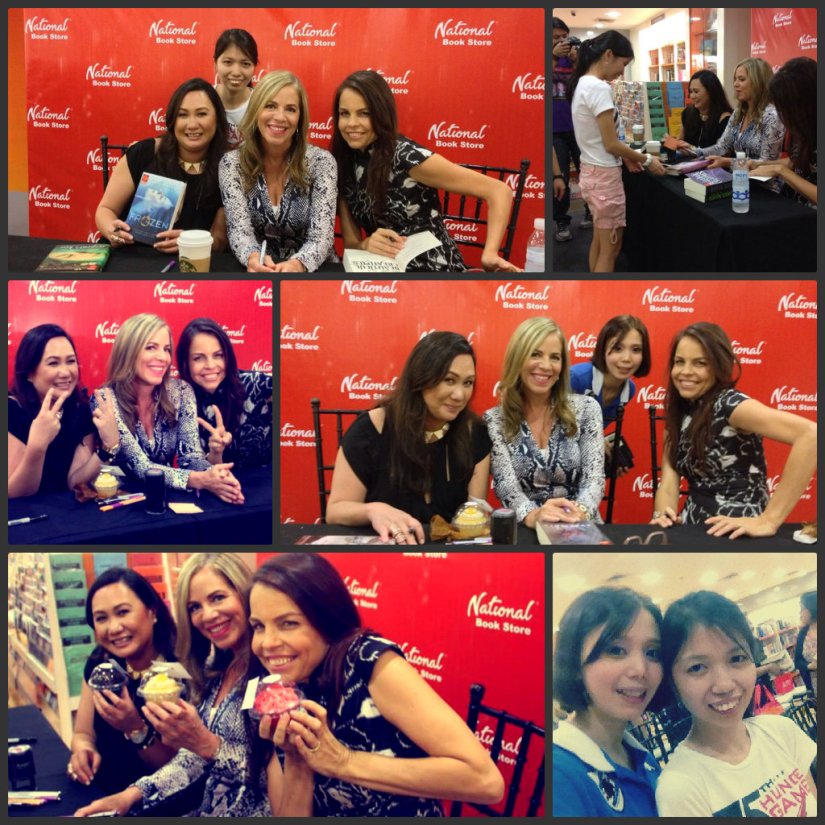 Margareth Stohl is so entertaining! Her energy is contagious, we really have more fun at the forum because of her. She jokes a lot and even some of her answers where in a form of a joke. She discuss about her books and her writing process with Kami Garcia, where they exchanges stories and edit each others works while making sure to always make the story move forward. Their process are kinda hilarious, especially on how Margareth told them to us, like how Kami will end up removing most of her entries or transforming the stories in a way she didn’t originally intended, then she’ll end up getting back to Kami by killing her character or something like that. She also discuss a few things about Dangerous Creatures, an upcoming spin-off series from Beautiful Creatures series she co-authored with Kami Garcia. The Dangerous Creatures will be out next year, May 6th, 2013.

Alyson Noel is back here in Manila again. This is her second visit here in the Philippines. She was here last year, July 2012 for a book signing at Greenbelt hosted by National Book Store. I wasn’t able to attend her first book signing since the event was scheduled Friday which means I have office work. Now, that she’s back I’m glad to finally able to see and talk to her in person. She’s so tall! Just saying out of nowhere! 😀 Anyway, she is writing few more books though she can’t revealed them yet. During the signing she also has this stamp she used for our books before signing them.

Other than meeting these lovely authors, bloggers forum is also my chance to meet again my fellow PH book bloggers. Most of those who attend the event are familiar faces and like a family already. And those new are a welcome addition in our growing group. As usual meeting these lovely ladies is so much fun. It’s like we are having a bookish conference, chatting about books of course!

After the bloggers forum, I went home to unload my things and grab some lunch before heading to the public book signing held at The Podium. There are just few more books I need to get signed for my friends. They’ll kill me if I didn’t go to the signing as I promised. At the signing, I see mix of attendees at the crowd. There are kids, young adults and adult fans too. It seems that these three authors, and I think I saw one celebrity/news anchor at the event (I’m not sure though since I don’t have my eyeglasses on at that time).

Melissa also revealed the titles of their next two books for Heart of Dread series which are Stolen and Broken. Though she said that they aren’t final yet, but if she have to choose those two are her choice. 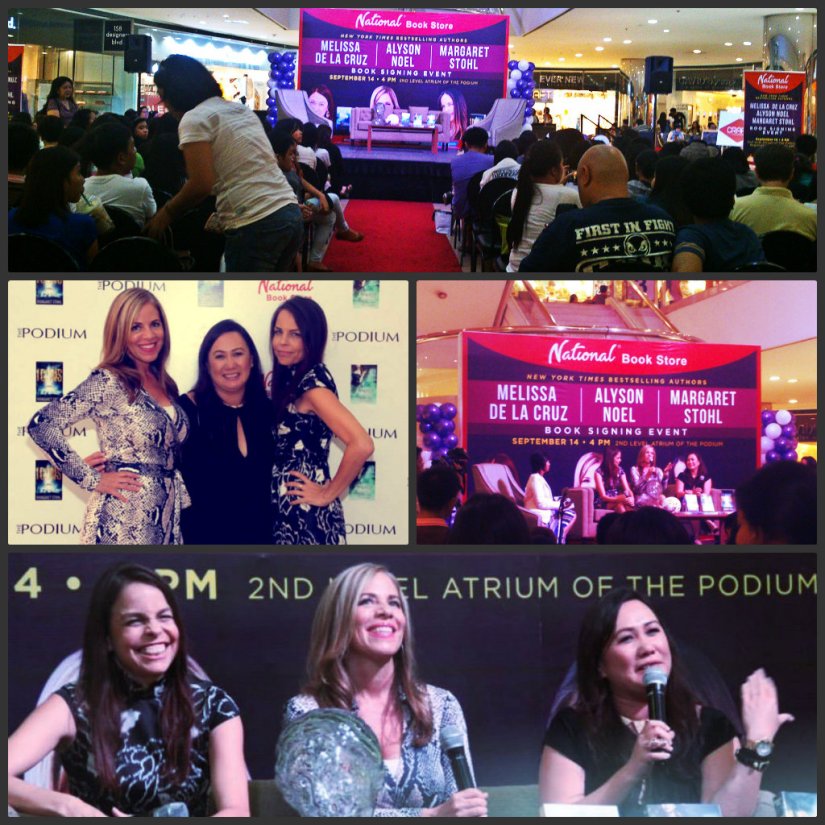 Thank you National Book Store and company for inviting me to join the forum. Thanks you also to Melissa De La Cruz, Margaret Stohl, and Alyson Noel for visiting us all the way here in Manila. It’s really a nice experience meeting and talking to all you three wonderful ladies.