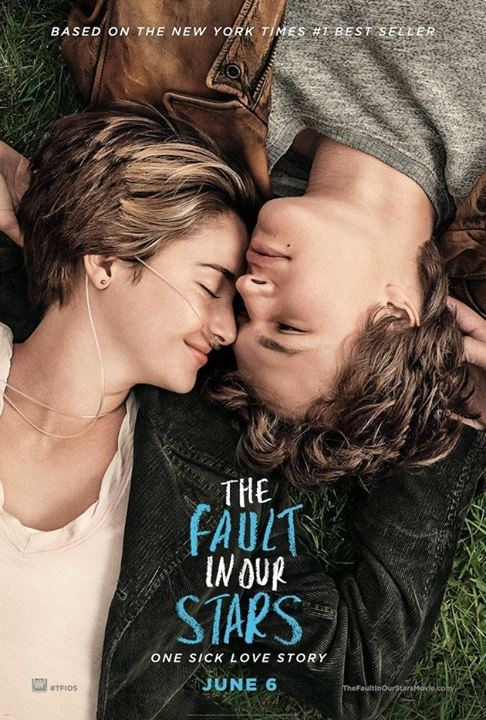 The Fault in our Stars is one big movie I am excitedly anticipating! The novel where this film is based is one of my favorite reads and I just love John Green!

As for the movie poster above, I think the film makers or whoever is in charge with that poster nailed it. I like that they make Hazel wear the breathing tube which simply emphasize her sickness without making her look too much  disable. I also like that they didn’t changed the font color (blue and white) of the title which is the same with what the publisher used in the first edition of the book.

On related news, there are fuzz circling online about the movie tagline, “One sick love story” criticizing the film makers or whoever think of the tagline for making joke out of two sick people’s love story, which is a dark topic discussed in the novel where the film is based.  John Green, author of the novel also said his opinion about the tagline through his Tumblr account.

I get it why some find “One sick love story”, tagline as offensive, but mostly because I assume that they haven’t read the book yet. Because if you have read John Green’s novel of the same title where this film is based you know how fitting that tagline is. “One sick love story” is something that characters would say. Possibly something Gus and Hazel would think of as their tagline for their own story. If not, they would certainly approved of it or they would laugh at it if they read the tagline themselves.

The Fault in our Stars  tells an honest and raw story of two cancer patients, Hazel Grace Lancaster and Augustus Waters, who find each other in a cancer support group. It is an heartbreaking novel that deals with sickness and death but also a humorous book. Trsut me, it’s so much more than a sad story! Okay? Okay.

As stated from the poster above, the film is due to released on June 6, 2014, which stars Shailene Woodley and Ansel Elgort as Hazel Grace and Agustus Waters respectively. I’m really excited to see this heartbreaking & heartwarming story on big screen!