Happy Valentines Day to all! I’m excited to finally share more informations about the blog event that keeps me busy this fast few months, Celebrating Debutantes 2016! Together with my bookish buddy, Precious of  Fragments of Life, we are hosting this blog event in which we will feature wonderful debut authors and their novels. There will be two parts: First Wave, in which we will be featuring January to June debut authors; Second Wave, for July to December debut authors.

First wave will start tomorrow, February 15th and will last until March 31st 2016. For 46 days we will feature debutantes of 2016 involving interviews, playlists and movie casts, reviews and giveaways!

To give you an idea of what to expect, I made a collage of the novels and authors that we will be featuring and at the bottom is a written list for your reference. 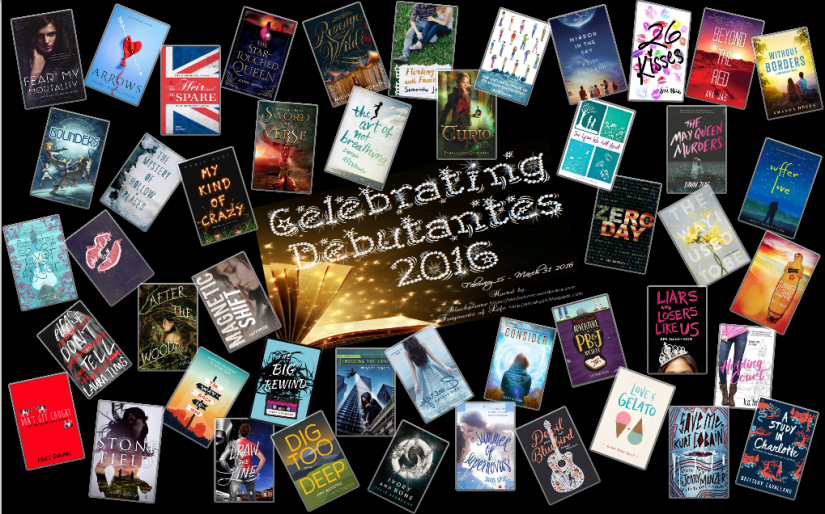 The Heir and the Spare by Emily Albright
Zero Day by Jan Gangsei
The Year We Fell Apart by Emily Martin
The Big Rewind by Libby Cudmore
The Mystery of Hollow Places by Rebecca Podos
Arrows by Melissa Gorzelanczyk
After the Woods by Kim Savage
Holding Court by KC Held
Sword and Verse by Kathy MacMillan
Magnetic Shift by Lucy Briand
Flirting with Fame by Samantha Joyce
Bounders by Monica Tesler
The Girl Who Fell by Shannon M. Parker
Bookishly Ever After by Isabel Bandeira
Beyond the Red by Ava Jae
A Study in Charlotte by Brittany Cavallaro
Suffer Love by Ashley Herring Blake
Revenge and the Wild by Michelle Modesto
Liars and Losers Like Us by Ami Allen-Vath
Crossing the Line by Meghan Rogers
Save Me, Kurt Cobain by Jenny Manzer
Fear My Mortality by Everly Frost
Without Borders by Amanda Heger
The Way Back to You by Michelle Andreani and Mindi Scott
Don’t Get Caught by Kurt Dinan
Stone Field by Christy Lenzi
The Last Great Adventure of the PB&J Society by Janet Johnson
Curio by Evangeline Denmark
Dig Too Deep by Amy Allgeyer
Consider by Kristy Acevedo
My Kind of Crazy by Robin Reul
The Star-Touched Queen by Roshani Chokshi
The Art of Not Breathing by Sarah Alexander
The Way I Used to Be by Amber Smith
Summer of Supernovas by Darcy Woods
The Last Fifth Grade of Emerson Elementary by Laura Shovan
Draw the Line by Laurent Linn
Devil and the Bluebird by Jennifer Mason-Black
26 Kisses by Anna Michels
Ivory and Bone by Julie Eshbaugh
Please Don’t Tell by Laura Tims
Emerge by Tobie Easton
The May Queen of Murders by Sarah Jude
Love & Gelato by Jenna Welch
Mirror in the Sky by Aditi Khorona
Summer of Sloane by Erin L. Schneider

I hope you’ll join us!