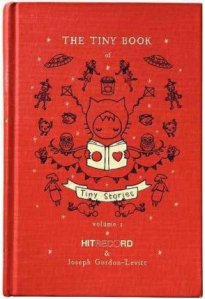 I first heard about The Tiny Book Of Tiny Stories from Joseph Gordon-Levitt tweets way back when the book is still plan to be released.  I am really intrigue about this book so I start following news about the publication, reading samples and watching videos about it. When hitRECord.org finally announced the printing of the book I am excited to get one. Though unfortunately for me, the book is only available  at that time from hitRECord online store. I waited for awhile hoping that the book will be released via international book sellers that offer shipping here in the Philippines such as Amazon and Barnes and Nobles. After months of waiting I lost track and hope. With so many books to track I really forgot about this book. It’s not even available from goodreads at that time so I can’t even add it in my To-Buy or To-Be-Read list. But today I found out that the book is officially released two days ago in the US and it is available from international book stores like Amazon and Barnes and Noble.

Trying to push my luck, I also tried to inquire from local book stores for the availability of this book but so far they don’t have any idea about this one. But I don’t care much about that, I’m still feeling lucky today because the book is also available from Book Depository. Which means I can surely get a copy soon. But for now I’m pushing this one to my wishlist, hoping I can get one this coming holiday. Afterall, it’s not advisable to order this season because of the crazy delivery system around the world this holiday.

Original Design of The Tiny Book Of Tiny Stories when it first came out from hitRECord.org

“The universe is not made of atoms; it’s made of tiny stories.”

To create The Tiny Book of Tiny Stories: Volume 1, Joseph Gordon-Levitt, known within the hitRECord community as RegularJOE—directed thousands of collaborators to tell tiny stories through words and art. With the help of the entire creative collective, Gordon-Levitt culled, edited and curated over 8,500 contributions into this finely tuned collection of original art from 67 contributors. Reminiscent of the 6-Word Memoir series, The Tiny Book of Tiny Stories: Volume 1 brings together art and voices from around the world to unite and tell stories that defy size. 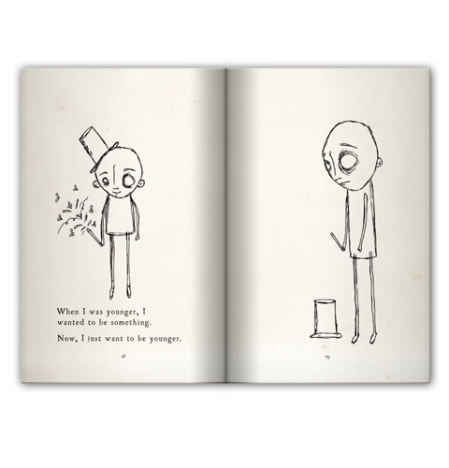 I had a hard time deciding if I’ll be writing a review for Inception or not. I don’t think I am good enough to write a review for a film like this but still I can’t help but give a space for this movie in my blog. The movie cannot be summarized by a line, paragraph, or even a review. It is something massive that can’t be analyze in one viewing alone. I’ve seen the movie only once and I’m still mazed.

The movie consists of several worlds layered on top of each other, and they all affect the physics of the next. It is a multi-layered journey into a constantly-changing dream worlds. It unlocked so many boxes that it is hard to label it with one genre. A piece of sci-fi, heist, action and psychological thriller. Sci-fi in a way it uses it’s imaginary and vast concept of dreams in creating a new world of ideas. Action movie because of fight scenes that whether real or imagined are given time, detail and disbelief. It is a thriller of the mind that won’t leave your head after viewing. It keeps you in constant suspense and constant shock. While the heist is in the creation of dream within dream within dream within dream (yes, multiple layers of dreams). It helps the hackers drill deep into their mark’s subconscious mind. The idea is that each nested dream happens more slowly than the one above it. You’re parsing four stories happening simultaneously, but at different timescales.

The director, Christopher Nolan make such a good job of creating worlds in this films. He mastered the arts of non-linear narrative, misdirection, and visually impressive scale then combines them all to create a masterpiece – Inception. He also crafted something unique and dynamic through the power of sheer story telling. His brilliant conception is outstanding. The story is fast pace full of exciting developments. Every location and every shot of the film is imaginative. The laws of gravity and physics are no longer apply. Cities folding up on itself, people can float, objects can move at any pace they want, time speed change. He created a world without rules. A world of dreams and imaginations floating at any given time.

Leonardo DiCaprio as Dominic “Dom” Cobb, delivers another outstanding performance. He can really handle mature and psychologically complex roles. He knows how to play people so torn up that they can barely even function as humans. Joseph Gordon-Levitt is exceptionally great in the role of Arthur. He is the epitome of professionalism. His gravity scene is one of the nice thing in this film. He gives the film the extra niche by not giving into the CGI. It makes the whole look of it quite real that we’re willing to submerge into this concept or idea behind it.

The final shot is cracking, it makes you think more. The debates weather Cobb’s is dreaming or in reality? and whether if the top (totem) starts to wobble or continue spinning is unending. But honestly, I don’t care much about the top. I don’t even believe that it is Cobb’s totem in the first place. At some point I ask – What If Cobb’s reality is nothing more than another dream level?

Finally, Inception is a clever film. It is incredibly original and extremely sophisticated. A genius in every level. From the script, direction, execution up to the performance. I won’t detail anymore how impressive this film is in each level but I love the fact that it requires us to actually engage with the film and keep thinking. It constantly bring questions that are brain melting, confusing, and fantastic. It give space where we can suspend reality and somehow makes us realize that dreams are essentially realistic. Inception is one of the best movies of 2010.

I’m not a big fan of romantic-comedy film, its a bit cliché for me. But I can’t believe I missed seeing this film in cinema. Gladly I got the chance to finally watched it after it’s blu-ray release. It is one of those low budget film who makes a sleeper hit in-spite of a less promotions. It is really a rare film who has it’s unique way of telling a story. The story begins in telling how it will end, a big warning from the narrator saying “it is not a love story” will give viewers a fair idea of where it is going. But it did a great job keeping viewers like me interested and entertained in-spite of knowing a possible sad ending. The way it tell the story get me caught up in a delightful journey rather than the destination.

The story was told from Tom’s point of view which makes Joseph Gordon-Levitt the main view of the entire film. He has some kind of task to carry the whole movie, which I think is perfectly accomplished. Tom’s character is likeable and Gordon-Levitt portray it with much justice. He’s hopeless romantic and heartbreakingly good as Tom. Zooey Deschanel as Summer doesn’t require as much depth but she has a tough job in keeping Summer lovable despite her questionable actions within the central relationship, but overall the actress completes the task well. They are both charming and have a real chemistry that it feels that they should be together in the end of the film and any other result is just smacks of tragedy and misfortune.

(500) Days Of Summer explores new ways to tell the world’s oldest story into an honest and realistic experience. It utilizes non-traditional ways of story telling from the nonlinear narrative way of story telling, animation, representation like when they put the grieving Tom into foreign films, and perhaps most effectively, the split screen segment emphasizing the huge difference between Tom’s “expectations” and “reality”. The animation scene particularly the bird when Tom is dancing on the street because of so much happiness is a bit weird and funny for me at first but I still enjoy watching it. It’s one of those moments where weirdness works properly.

Overall the film is good and refreshing. It made a simple and most common story interesting to watch. For all its objections about not being a love story, (500) Days of Summer is still a story about love. Maybe not a traditional love story with typical happily-ever-after ending but it still convey the message of love, the love of Tom and Summer. Their different views about love is the whole point of the story. It promote the ideas of fate and soul-mates in a more realistic and somehow blindly optimistic ending.