Today I’m featuring new author Alison Gervais and her debut novel, In 27 Days as part of Celebrating Debutantes 2017 blog event. The story first appeared in Wattpad and then released this year under Blink publishing. Alison was nice enough to answer a few questions for me about In 27 Days and writing. so I hope you guys enjoy the interview.

Following the author interview is Alison Gervais’s author bio along with places where to find her online. Then there’s also the book description and where to order copies of In 27 Days. And if you would like the chance to win a copy of the book I’m giving away one below. Just enter the rafflecopter form a bit further down in this post for a chance to win.

Have you always known you wanted to be a writer? What inspired your debut novel, In 27 Days?
I think in some way I always knew I wanted to be a writer, but that I probably wouldn’t have much luck getting those stories published. Funny how sometimes dreams have a way of coming true, huh? J
I literally have no idea where the inspiration for IN 27 DAYS itself came from, but I would say a lot of my own personal experiences with depression and suicidal thoughts definitely inspired and/or influenced pieces of the story. While I was writing, it became my way of getting everything I was feeling down on paper, and there I was actually able to feel as if I had some control over something going on in my life.

Could you describe In 27 days in 140 characters?
IN 27 DAYS is a story that features time travel, friendship, family and love, while discussing the taboo subjects of mental health and suicide. The main protagonist, Hadley Jamison, is your every-kind-of-girl that a lot of people mind find themselves relating to, while Archer Morales, her opposite, struggles daily with his depression and the desire to take care of and protect his family while just trying to make it through high school. Of course the supernatural elements to the story also add to the excitement as well!

What is the difference between the Wattpad version and final version of In 27 Days?
The final published version of IN 27 DAYS underwent some pretty rigorous editing that took nearly a year. Inconsistencies from the original Wattpad version were addressed, multiple characters might have become one, and I think a little more excitement worked its way in there too.

Do you have a particular approach to research and writing?
I did conduct a little bit of research by way of landmarks in New York City as well as the Italian language, seeing as Archer’s family is Italian, but not much else there.
Did you learn any deep, interesting, or shocking truths while working on this novel—about writing in general, or about yourself?
After the final draft was finished and it was on its way to publication, I think I was surprised when my family read the story and told me the little bits and pieces of myself that they found in the story. They could tell what came from me, what experiences might have influenced maybe a certain scene or something, and I just found that surprising. I didn’t know I had more than just a few outside experiences influencing bits of my writing.

If you could write a story in another genre, what genre would it be and what would it be about?
I’ve always been fascinated by historical fiction! I think I might give that a whirl sometime in the future!

Lets say you’ll meet Death today, and he offer you to go back in time to meet and talk to someone who already died, who will you choose and why? What will you say to him/her?
I honestly have no idea who I would want to meet from the past! Maybe Jane Austen or Charlotte Bronte. I’m a huge fan of theirs! And, of course, I would probably ask them for writing advice. Who wouldn’t?

What can we expect from you in the future? Anything you can tell about the sequel, Face your Fears?
I’m still hard at work writing, of course, and definitely have some new things in the word, so keep an eye out for that! J
In terms of Face Your Fears, there are no plans to publish that story. It will likely just remain a sequel to the Wattpad version and not the official published version. 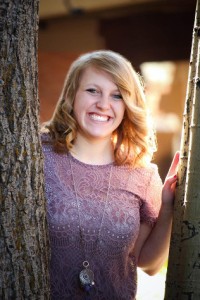 Alison Gervais graduated in May 2017 from university with BA in Creative Writing. First began writing at age four, where debut story was about a frog king and his loyal servants. Joined the fabulous writer’s site Wattpad in 2011. First novel, IN 27 DAYS NOW PUBLISHED via Blink/HarperCollins. Currently repp’ed by the fantastic Shannon Hassan at Marsal Lyon Literary Agency. 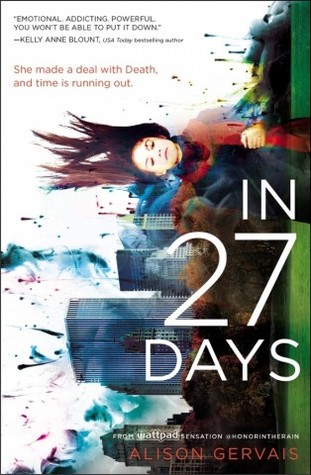 Hadley Jamison is shocked when she hears that her classmate, Archer Morales, has committed suicide. She didn’t know the quiet, reserved guy very well, but that doesn’t stop her from feeling there was something she could have done to help him.

Hoping to find some sense of closure, Hadley attends Archer’s funeral. There, Hadley is approached by a man who calls himself Death and offers her a deal. If Hadley accepts, she will be sent back 27 days in time to prevent Archer from killing himself. But when Hadley agrees to Death’s terms and goes back to right the past, she quickly learns her mission is harder than she ever could have known.

Hadley soon discovers Archer’s reasons for being alone, and Archer realizes that having someone to confide in isn’t as bad as he’d always thought. But when a series of dangerous accidents starts pushing them apart, Hadley must decide whether she is ready to risk everything – including her life – to keep Archer safe.